About Contact Us Policies Mailing Lists Radio Video Publish! Calendar Search
Front Page Features:   previous page 2 next page | single feature archives | weekly archives
An Open Letter to the Drink Tax "Astroturf"
From the open newswire: An open letter to the fake grassroots organization, created by lobbyists and PR firms, that is meant to appear local and spontaneous in its opposition to the propsed 10% drink tax.

The letter's author later posted a correction based upon correspondence with local restaraunt owners.

On Friday, March 30, Allegheny County's Port Authority Board voted 8-1 to cut bus service by 15 percent. The service cuts will go into effect on June 17th. In addition, transit workers will face a salary and benefits freeze, and ACCESS (a service for senior citizens and persons with disabilities) will see a $.50 increase by July 1st. Bus service could be cut an additional 10% in September if the Port Authority can't fill the remaining $45 million deficit.

Save Our Transit held an overnight an overnight vigil leading up to the Port Authority Board's meeting in which the proposal was voted on. Members of Save Our Transit and the Campaign to Stop the Bus Cuts say they will keep fighting to stop the cuts. from going into effect 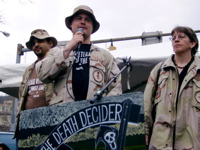 On Saturday, March 24th, one day after the House voted to give Bush another $100 billion to continue wars in Afghanistan and Iraq, 1,200 took to the streets of Oakland to demand, "Education not Occupation, Healthcare not Warfare, Buses not Bombs," and Bring the Troops Home Now."

Leading the 1.5 mile march organized by the Thomas Merton Center Anti-War Committee were members of Iraq Vets Against the War and Veterans for Peace, followed by high school and college students comprising a "youth against enlistment" contingent. Adding to the festive nature of the march was a marching band and a cluster of anarchists carrying more than a dozen large black flags.

A separate "feeder march" organized by the Anti-War Committee and SEIU 1199P stepped off from the VA Hospital in North Oakland, in which activists sought to draw attention to the inadequate health care and treatment of thousands of wounded Iraq vets. There was also a women's feeder march organized by CodePink and other women's group and a feeder that began at the Friends Meeting House in Oakland.

Saturday's march capped off anniversary actions that started last week. On Saturday, March 18, Pittsburghers boarded a bus to Washington DC for a March on the Pentagon. On Monday night, Pittsburghers Against War Supplementals held a vigil outside Congressmen Mike Doyle's office, and Pittsburgh Organizing Group picketed the Oakland recruiting station before marching to CMU. From Friday night through Saturday morning, as many as 60 activists stopped by an all-night candlelight vigil at the Community of Reconciliation Church in Oakland. 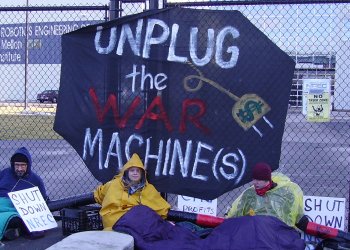 On Friday March 2nd the Pittsburgh Organizing Group and other activists from Pittsburgh, Ohio, and Chicago came together early in the morning to protest Carnegie Mellon University's National Robotics Engineering Center. Organizing under the slogan "Barricade the War Machine," they succeeded in hutting down the Lawrenceville facility for the day.  NREC is a largely Pentagon-funded venture of CMU, and it has become a world leader in warfare robotics.

In order to disrupt the normal proceedings at NREC, a blockade of their front and rear entrances was organized.  A tripod, which suspended an activist 15 feet in the air, also prevented people from entering the building. In total, thirty-four people blockaded the main entrances to the facility in the largest act of civil disobedience in Pittsburgh since the war in Iraq began. For several hours, police were unable to cut the protestors loose, which allowed the blockade to last for over 5 hours.

Members of POG are declaring the action a success. As of 4:00 AM, on Saturday March 3rd, all 14 arrestees were arraigned and released. They are being charged with failure to disperse, obstruction of a public highway, and possession of instruments of a crime with criminal intent. Those who live in the Pittsburgh area were released on their own recognizance, while non-locals had to post a $100 bail. Their hearing will take place March 8th.

So which of these candidates is really green?  Local activist Stephen Donahue says the answer is neither.

Update: Bill Peduto has since withdrawn from the mayoral primary.